When more than twenty-five years ago the Olsztyn theater staged the theatrical performance Henry Miller and after several shows the title disappeared from the repertoire, they were loud rumors that the spectacle had been suspended. Supposedly, the actor playing the hero of the spectacle caused scandal and outrage in some viewers (or rather in the confidants of those viewers, who had never seen Henry Miller). The spectacle, bearing the clause „closed”, soon returned to the stage, heating the arguments for and against explaining the character of Tropic of Cancer’s author to Poles. Noir sur Blanc decided to remind us about the fact, that in the name of Henry Miller, despite the many years that have passed since his works’ worldly and Polish debut, there is still an obscene mystery, and that just in Tropic of Cancer, among other novels of the writer, the thinnest line separates sex from poetry.

Miller’s memoirs from his „culturally late” trip to Europe primarily make up the visage of an anti-touristic Paris, an alternative Paris; appropriately selected, they could constitute an untypical and quite intriguing guide to this site of Baudelaire’s city, which is hidden from tourists’ eyes. Stinking pubs and rooms piled high with bizarre, starving artists, highlighted on Paris district maps, could have short philosophical reflections on the essence of life and the masks we accept attached to them. A broken bench in the park near the Eiffel Tower, with a few bottles of cheap wine leaning against a tree, could be a chance to reflect on the strong need to create, and a broken door to a nightclub could be an impulse to discuss the delicate and contractual matter of the artist’s „self”, his or her success or defeat. However, you do not have to resort to any extreme tourism in order to, while reading Tropic of Cancer, experience a world of scam, dirt, caricatures of human characters, of behaviors, of feelings and everything else…. To enter an annoying acquaintance with a writer who wants to create but still encounters obstacles, and with Americans, absorbing Paris away from a boring everyday life left on the other side of the ocean and following the weirdest ideas of carelessness and irresponsibility. To flinch with disgust while listening to stories of most often unsuccessful love conquests…. No, this is not the right word – rather of erotic contacts full of scary contempt for the one who desires and the one who is desired.

Was the novel intended by the author to be a deliberate challenge not only for its readers but also for the whole, scrupulous society that could not or did not want to see that there was another dimension, somewhere around the corner of the street, a universum without ornamentations, without feelings? Even or especially in cities such as Paris? An unclean, unwashed world, in which you must survive without credit cards, without even a few coins in your pockets, whose cleaner side is full of paintings by the finest painters in gold-plated frames. Only one thing is certain – even this bestial world has its worries and hopes. Short moments of contentment and consent.

What provoked such events like Tropic of Cancer, already almost a hundred years ago, and more specifically in the 1930s? What conclusions about the expectations of literature, and perhaps even of the very nature of man do we suggest, saying that this book of Miller’s is resistant to the influence of time? Is the fact that time did not soften anything or erase anything in Tropic of Cancer the reason for the author’s pride and the American literature of the first half of the twentieth century, or rather the horror and shame of those who have ever had a chance to familiarize themselves with the output of Miller? The novel in the new Polish edition is accompanied by a balanced but no less stimulating epilogue, which came from the pen of Tropic of Canser’s translator Leslaw Ludwig, who is undoubtedly an expert in translating works of American scandalists. As a rule, editors of prose advise not to start readings from attached introductions, but I think that in the case discussed here it is precisely from the reflections of Leslaw Ludwig that those who encounter Miller for the first time should start. The reflections of the perfect translator are not only a supplement to what the reader cannot read or can easily skip in Tropic of Cancer, they are not merely a summary of the plot of the novel.

Miller is occasionally an uncompromising observer, a landscapist-exhibitionist, and above all a timeless analyst of human weakness and fascination. His heroes are selfish, repulsive, provocative clowns with other „selves” that sometimes manifest themselves while in contact with literature, art, or not quite dead sentiments. Reaching for Tropic of Cancer, it is hard to say which of our selves will win, allowing us to live a few hours in Miller’s circus, or, on the contrary, repulse us from his writing forever. 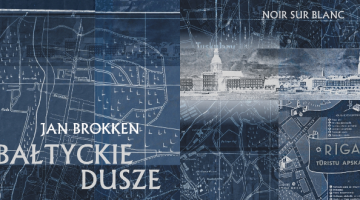