Many dignified scientists, activists and traveling hippies have find something fascinating and worthwhile to contemplate in the sources of Judaism, Catholicism, Hinduism, Buddhism, Scientology, and Indian beliefs where beatnicks once built their empires. The most intriguing places of their creativity have seemed to be those where different infuences mix. Paweł Gibas, a young humanist, decided to identify and name these locations, analyze and interpret them.

The author actually benefited from the writers’ rich output, although only the most famous and generally associated with the beat-generation – but I’m afraid beatnicks’ lovers will hardly admit that he has guided us far enough to the promised sources. We will find in his book about the genesis of this crazy bunch of literary prophets and fortune tellers and its place in the field from literary to sociological nothing more than what we can read in available Polish commentaries and discussions. Not to mention foreign publications, which may not deny the theses of the Polish beat generation researcher, but certainly deepen and nuance them.

Of course, some of the themes have to come up now matter how we defend ourselves – the hippie movement, the American transcendentalists, jazz, marijuana and LSD. There is no way to avoid this kind of foundation, and why would anyone want to do that? The American rebels are not discussed in Polish high schools, fragments from their books are not driven into our heads by Polish teachers. And yet, we know quite a bit about the holy trinity of the beat generation – Burroughs, Kerouac, and Ginsberg. It is a pity that the author did not decide to forgo these milestones in such a way as to cast a little more light on the characters that – as indeed the first one in Poland – he could have rescued from obscurity. Marginated writers also ask for attention – such as Lamantia, Joans and Gysin – to name another three persons, this time forgotten.

However, Paweł Gibas’ book could be a great introduction for „beginners” – if not for the author’s persistently repetitive style of analysis while evaluating the creative accomplishments of the beat generation. „In the next work…”, „in turn a poem constructed by another writer…” – so begin too many paragraphs in his Sacrum and Profanum. The book’s editors praise the author for having published an article on the religious inclinations of beatniks in a highly acclaimed journal. Perhaps it is not enough to publish your own monographs as groundbreaking and first in something, and perhaps there would be more rescued from the book by Gibas, if not for its tedious, not preparing for any discovery, language. The author wants to demonstrate how strongly the sacrum mixes with profanum in the texts of beatniks. It is difficult to experience this type of „intermixture”, thinking of their novels and poems in the dry tone of a lecture. In addition, sometimes the author analyzes one short piece in several places, matching its subject to various topics, guiding slogans. Thus, the chapters are shorter and perhaps more encouraging for those who are encoutering the matter for the first time. But deep reading of poetry and prose in order to discover the intricate ways in which spiritual themes are nestled in the work of beatniks sometimes requires trying to capture several motifs at once and see how they relate to each other. If the holy ghost, the buddha and a tarot card appear in one poem, we cannot analyze the holy ghost in one place, the buddha in another chapter, and the tarot in the section titled „divination”. At the very least, this practice takes us somewhere far from the essence of the analized piece. We need to put together all the small chunks scattered throughout the various parts of the book to try to recreate the meaning of one specific poem; on page 12 we will find that it talks about prayer, on page 56 we will find out who is praying…

I was most disappointed with the last chapter of the book, because I had the most hope for it – the reception of beatniks in Poland. I did not find out why they were read, why they got that and not another popularity, and what it says about us and about them. Yes, I already know what translations and what attempts at discussion have appeared, but the kaleidoscope of events, although undoubtedly very valuable, does not replace a summary reflection.

Gibas’ book is certainly a work in the field of literary studies that is reluctant to look at other sciences. The Spiritual Imagination of the Beats is incomparably more insightful and lively, presenting the occult, mystical, or alchemical beatnik tradition and widening the spectrum, because there are at least a dozen or so heroes in this story. On the other hand, the Polish researcher has overthrown the myth that beatniks have played with the esoteric and the exotic for fun and his book can provoke us to ask questions for research conducted on our own or with the help of other publications: in what sense did religion, a profane religion, offer a new vision of engaged literature?; in what way did beatniks’ religiosity influence punk artists, especially punk poetry?; is it really possible to talk about some common philosophy of religion linking the previously mentioned „trinity” or perhaps their experience of holiness would question any attempt to build some sort of theory? 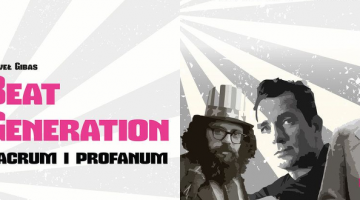