Interview: Something more than street savoir-vivre – a talk with Faust, a representative of the Lesser Poland hip-hop scene

In recent months the world of literature has resounded and explained anew the phenomenon of a particular poetic genre – rock lyrics. Granting the Nobel Prize to Bob Dylan has provoked not only the comments of professional critics and professors, but also readers who have wanted to boast of their love for literature and rock music. But those who think rock fans have a monopoly on reading books are wrong.

On the occasion of the premiere of the new project Mixtape III by the young rapper and musician Faust, Joanna Roś talks with the artist about language, literature and responsibility for one’s words.

Joanna Roś: Why did you choose the nickname Faust? Is Goethe an important figure for you, or are you intrigued by the symbol of a man who makes a pact with the devil in order to unravel the mystery of existence?

Faust: Of all the literary characters I have met, Faust is my unrivaled number one. I assumed the same nickname as the protagonist of Goethe’s drama because of the similarity I felt between us. In my opinion, the knowledge that can be acquired at school and at university is just empty theory. Practice is a completely different story. Just like Goethe’s Faust, I do not feel satisfied with the knowledge I have gained so far. I would like to know literally everything! I would like to know the answer to every question. Gaining more knowledge only makes me realize how many questions remain unanswered. Without hesitation I would make a pact with the devil to discover the secrets of existence and be able to realize my dreams.

Do you agree with the observation that literary inspirations of rock music artists are generally highly praised by the fans of literature and cultural journalists, while a not always silent war in the rap-literature field continues? Or is it just an impression of someone looking at hip-hop culture from the outside?

Hip-hop culture originates from the streets. Many music pieces are limited to topics such as drugs, anti-police attitudes, a hard life in public housing, a bad family situation, etc. The artists representing this culture do not refer to ambitious things, because their audience is made up of people living in public housing as those musians themselves are. There is no need and there will be no need for hip-hop to draw from literature (or those artists do not know any works that could be called ambitious). All indications are that this original current of gangsta rap is currently dying. There are not many street rappers at this moment, and those who still persist are no longer as popular as before. I would not call it a silent war. It’s more a matter of differences. Some turn to street subjects, others use cultural texts to convey something more than street savoir-vivre. For comparison: Rahim raps in this way: Bądź sobą, pokaż piękne wnętrze Quasimodo/ Rusz głową, nie stój jak posąg Dyskobol/ I nie gap się tym tępym wzrokiem Hodor/ Bez cierpienia nie zrozumiesz szczęścia Fiodor (Be yourself, show your beautiful self Quasimodo / Move your head, don’t stand like a statue Dyskobol / And don’t stare with that dull look Hodor / Without suffering you won’t understand happiness Fyodor – J.R.), and Wilk from Hemp Gru raps in this way – Hemp Gru prosto z ulicy wieści/ Ja i moje ziomki nikt gorszy nikt lepszy/ Jestem po to by prawdę przynieść ci/ Policyjne ścierwo to wróg największy (Hemp Gru the news straight from the street / Me and my bros neither better neither worse / I’m here to bring you the truth / The police shit is our greatest enemy – J.R.). Two performers of the same musical genre. Each will reach a different audience. Well, provided that the listener attaches importance to the text, not just to the sound.

What is your opinion about music projects, the essence of which is the rapping of poetry? I mean, for instance, the album Różewicz. Interpretacje (Różewicz. Interpretations) by the producer duo Sampler Orchestra, featuring two very famous rappers – Sokół and Hades.

I support such actions. I’m glad to see rap going in that direction. It’s something new, after all. Usually the rapper writes the lyrics and later realizes them with a beat. Something else happens in this case of rapping poetry – there is often no rhyme where you would expect it to be. It sounds more interesting, but I prefer to read the poem than to hear it as song lyrics. I do not like Różewicz. Interpretations as an album, but the idea was very good. This is one of the few hip-hop projects that can attract the attention of people who until now were uninterested in this genre of music. By the way, let me mention my Mixtape III. The bonus track will be a rapped poem. But I will not say which poem it will be.

Does it annoy you when lyricists write lyrics full of language mistakes? Do you see a chance here to create a new language?

In no case do I see here a chance to create a new language. A mistake is a mistake and so it should be. I understand that everyone makes mistakes, I don’t get nervous if there are one or two errors in the whole track. However, when there are a lot of them, I turn off the song and I don’t go back to it. On the other hand, I do not mind the multitude of errors appearing in the piece To nic nie znaczy (It means nothing) or ĄĘ by Łona. But here we have a completely different situation. Here errors have been committed deliberately to make the listener aware of something.

Are your songs more autobiographical or fictional?

My songs are more autobiographical and descriptive than fictional. I write when I am inspired. Then the theme of the piece depends on what I feel at the moment.  Songs such as D.I.D, Karykatury (Caricatures), System, Karnawał (Carnival) originated in anger. On the other hand, Górnoloty (Elations), Evviva L’arte, Kalejdoskop (Kaleidoscope) were composed when I felt good, when I was relaxed. I tried to write fictional texts. Unfortunately, I’m not fit for that. I cannot finish a stanza, from verse to verse my text more and more reminds me of waffle. I prefer to write something about myself and then to hope that someone with similar views will identify with me.

How do listeners respond to your songs at concerts? What kind of comments have you gathered about your music and lyrics?

The majority of listeners appearing at concerts are people who have already heard my music. They mostly compare the recordings and the live versions. I have met with the opinion that „live versions are better”. Do not forget also about that part of the audience that has not met with my work before. From them I have heard mostly positive reviews. They said it was cool that the texts were not made of colloquialisms. In addition, they inquired about my artistic activity: did I earn money from it, where could they find my music, or did I work under one of the labels? Once I even met with the statement that on stage I remind the listeners of Magik (Kaliber 44, Paktofonika).

In the piece Jest nas dwóch tu! (There are two of us, here!) from your Evviva L’Arte EP, appear the words Jestem odpowiedzialny za każdą z liter w tekstach (I’m responsible for every letter of my texts). What responsibility do you feel as a musician and a lyricist? And before whom?

I feel responsible for the sense and message. I do not want it to be a bunch of words. Many musicians are limited in their work because they do not want to offend anyone. By striking some part of society with a verse or stanza you can lose listeners. I do not care, athough doing so „I shoot myself in the foot”. But I am myself – if I am against an ideology, I express it in the text no matter how the fans could react. I feel this responsibility only before myself. I will never write a piece that is not consistent with what I belive in. Zawsze po swojemu, niezależnie od publiki (Always as I please, no matter what the public needs) (the verse from my song I have not burned out).

I tak wykrzykniem; gdy wszystko nic warte, evviva l’arte! (we will acclaim when nothing matters, evviva l’arte! – wrote Kazimierz Przerwa-Tetmajer in the poem whose spirit seems to float over your creativity. Do you believe that the creative act, jedyne co się liczy, (…) muzyka dla muzyki (the only thing that matters (…) music for music’s sake), as you rap in the song Podziemie (Underground), can save from pessimism and nihilism?

Yes, I see this in my own example. When I am „down in the dumps”, when something causing frustration happens to me, I always run into the world of music. It is music that saves me and many people from the attitudes you have mentioned.

Albert Murray, an American music critic, characterized hip-hop as a vessel capable of containing the whole of human experience – a sense of defeat and of sadness, of rapture and of despair. Your lyrics seem to me to be full of despair, but at the same time they encourage listeners to celebrate their lives. The joy present in your texts is paradoxical and complicated. Would you agree with me?

On the one hand, I have a negative attitude towards the world. I cannot accept certain patterns that direct life. All the time I see very clearly the imperfections of human characters and their conscious pursuit of self-destruction. Every day I see how the masses are hurrying really to nowhere. Today, the priority of the 21st century’s man is to get a job that will give you as much money as possible. Instead of chasing after their dreams, people prefer to „jump up the rungs” of their careers. They do not suppose that one day when they wake up, it will be too late. On the other hand, I still believe that this can be changed. I do not know how, but I’m sure it’s possible.

The relation between rap and poetry is often pointed out. The lyrics of whose rappers would you call poetry without hesitation?

It’s hard to tell. The poetic works which I know are those of authors such as Mickiewicz, Norwid, Słowacki or Miłosz. With regard to the works of such „old” poets, the texts of contemporary poets and rappers are just nothing. Maybe they have the right message but they lack the stylistics. If I had to choose, I would point to texts by L.U.C, Łona, Magik and a few verses by O.S.T.R.

Your texts already popularize certain titles and specific authors, but if you were to compose your own mini textbook for literature, what works or fragments of works would you include in it?

From the works I know, I would definitely choose the following:

– S. Mrożek: Tango, The Emigrants, The Party, At Sea

– Dostoevsky: Crime and Punishment, The House of the Dead

Would you recommend some of your songs to those who have not yet had the opportunity to come across your work?

I encourage you to listen to my three pieces:

Thank you for the interview. 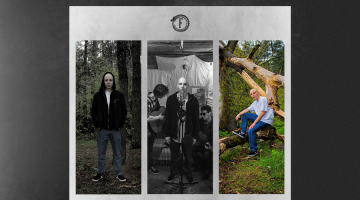